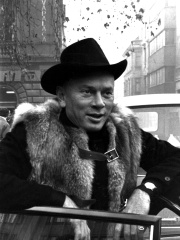 Yuliy Borisovich Briner (Russian: Юлий Борисович Бринер; July 11, 1920 – October 10, 1985), known professionally as Yul Brynner, was a Russian-born actor. He was best known for his portrayal of King Mongkut in the Rodgers and Hammerstein stage musical The King and I, for which he won two Tony Awards, and later an Academy Award for Best Actor for the film adaptation. He played the role 4,625 times on stage and became known for his shaved head, which he maintained as a personal trademark long after adopting it for The King and I. Considered one of the first Russian-American film stars, he was honored with a ceremony to put his handprints in front of Grauman's Chinese Theatre in Hollywood in 1956, and also received a star on the Hollywood Walk of Fame in 1960. In 1956, Brynner received the National Board of Review Award for Best Actor for his portrayal of Rameses II in the Cecil B. Read more on Wikipedia

Yul Brynner is most famous for his role as the King of Siam in the Rodgers and Hammerstein musical The King and I.