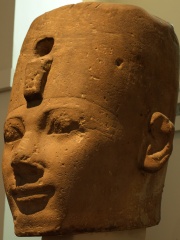 Thutmose I (sometimes read as Thutmosis or Tuthmosis I, Thothmes in older history works in Latinized Greek; Ancient Egyptian: ḏḥwtj-ms, Tʼaḥawtī-mīsaw, pronounced [tʼaˈħawtij ˈmisˌaw], meaning "Thoth is born") was the third pharaoh of the 18th Dynasty of Egypt. He received the throne after the death of the previous king, Amenhotep I. During his reign, he campaigned deep into the Levant and Nubia, pushing the borders of Egypt farther than ever before in each region. He also built many temples in Egypt, and a tomb for himself in the Valley of the Kings; he is the first king confirmed to have done this (though Amenhotep I may have preceded him). Thutmose I's reign is generally dated to 1506–1493 BC, but a minority of scholars—who think that astrological observations used to calculate the timeline of ancient Egyptian records, and thus the reign of Thutmose I, were taken from the city of Memphis rather than from Thebes—would date his reign to 1526–1513 BC. Read more on Wikipedia

Thutmose I was the third pharaoh of the 18th dynasty of ancient Egypt. He was the son of Thutmose I and a minor wife, Mutnofret. He was not the son of Queen Hatshepsut, who was the daughter of Thutmose I. Thutmose I was famous for his campaigns to conquer Syria and Nubia, and for establishing trade relations with the Land of Punt.

Page views of Thutmose IS by language

Among politicians, Thutmose I ranks 511 out of 15,710. Before him are Gideon, António Guterres, Patrice Lumumba, Geronimo, Abd al-Malik ibn Marwan, and Georges Clemenceau. After him are George II of Great Britain, Henry II, Holy Roman Emperor, Robert Mugabe, Menachem Begin, Frederick I of Prussia, and Valerian.