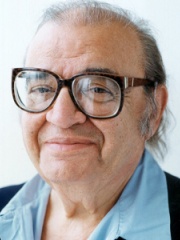 Mario Francis Puzo (; Italian: [ˈmaːrjo ˈputtso, -ddzo]; October 15, 1920 – July 2, 1999) was an American author, screenwriter, and journalist. He is known for his crime novels about the Italian-American Mafia and Sicilian Mafia, most notably The Godfather (1969), which he later co-adapted into a film trilogy directed by Francis Ford Coppola. He received the Academy Award for Best Adapted Screenplay for the first film in 1972 and for Part II in 1974. Read more on Wikipedia

Mario Puzo is most famous for his novel The Godfather, which was made into a movie by Francis Ford Coppola.

Among writers, Mario Puzo ranks 312 out of 5,755. Before him are Roger Martin du Gard, Lorenzo Valla, J. M. Coetzee, Paul Heyse, Ryūnosuke Akutagawa, and Prosper Mérimée. After him are Raymond Chandler, Paul Celan, Callimachus, Gregory of Tours, Karl May, and François Mauriac.