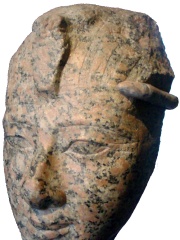 Amenhotep II (sometimes called Amenophis II and meaning 'Amun is Satisfied') was the seventh pharaoh of the Eighteenth Dynasty of Egypt. Amenhotep inherited a vast kingdom from his father Thutmose III, and held it by means of a few military campaigns in Syria; however, he fought much less than his father, and his reign saw the effective cessation of hostilities between Egypt and Mitanni, the major kingdoms vying for power in Syria. His reign is usually dated from 1427 to 1401 BC. Read more on Wikipedia

Amenhotep II is most famous for being the son of Thutmose III, who ruled Egypt in the 18th dynasty. Amenhotep II was the fifth ruler of the 18th dynasty and reigned for about 12 years. He is considered to be one of the most powerful pharaohs of ancient Egypt.

Among politicians, Amenhotep II ranks 905 out of 15,710. Before him are Mahathir Mohamad, Michel Temer, Vlad II Dracul, Guangxu Emperor, Hassan Rouhani, and Barbara of Cilli. After him are Sibylla, Queen of Jerusalem, Djedefre, Elisabeth of France, Archduke Karl Ludwig of Austria, Benjamin Disraeli, and Mindaugas.