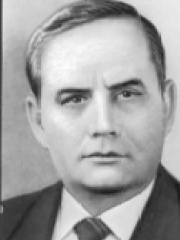 Vladimir Antonovich Ivashko (Russian: Влади́мир Анто́нович Ива́шко; Ukrainian: Володимир Антонович Івашко, Volodymyr Antonovych Ivashko; 28 October 1932 – 13 November 1994) was a Soviet Ukrainian politician, briefly acting as General Secretary of the Communist Party of the Soviet Union (CPSU) during the period from 24 to 29 August 1991. On 24 August Mikhail Gorbachev resigned from the post, and on 29 August the CPSU was suspended by the Supreme Soviet. Read more on Wikipedia

Vladimir Ivashko is most famous for being the Soviet Union's first cosmonaut. He was the first human to fly in space on April 12, 1961.

Among politicians, Vladimir Ivashko ranks 2,258 out of 15,577. Before him are Palmiro Togliatti, Simon de Montfort, 5th Earl of Leicester, Diaochan, Albert III, Duke of Austria, Alexander, and Theodora Porphyrogenita. After him are Gwanggaeto the Great, Erich Koch, Fath-Ali Shah Qajar, Semerkhet, Alfonso the Battler, and Aníbal Cavaco Silva.