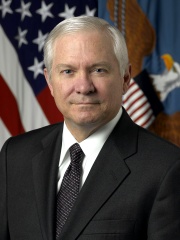 Robert Michael Gates (born September 25, 1943) is an American intelligence analyst, and university president who served as the 22nd United States secretary of defense from 2006 to 2011. He was originally appointed by President George W. Bush and was retained for service by President Barack Obama. Gates began his career serving as an officer in the United States Air Force but was quickly recruited by the Central Intelligence Agency (CIA). Gates served for 26 years in the CIA and the National Security Council, and was Director of Central Intelligence under President George H. W. Read more on Wikipedia

Among politicians, Robert Gates ranks 9,502 out of 15,710. Before him are Rafael Urdaneta, Miguel Trovoada, Albert Azaryan, Rahotep, Svetozar Pribićević, and Oswiu. After him are William Joseph Simmons, Arnulf, Count of Holland, Viliam Široký, Surayud Chulanont, Constantine III of Scotland, and Izyaslav of Polotsk.