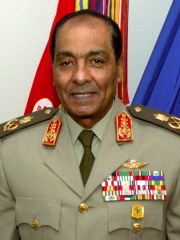 Mohamed Hussein Tantawi Soliman (Arabic: محمد حسين طنطاوي سليمان‎, Egyptian Arabic: [mæˈħæmmæd ħeˈseːn tˤɑnˈtˤɑːwi seleˈmæːn]; 31 October 1935 – 21 September 2021) was an Egyptian field marshal and politician. He was the commander-in-chief of the Egyptian Armed Forces and, as chairman of the Supreme Council of the Armed Forces, was the de facto head of state from the ousting of President Hosni Mubarak on 11 February 2011 until the inauguration of Mohamed Morsi as president of Egypt on 30 June 2012. Read more on Wikipedia

Mohamed Hussein Tantawi is most famous for being the head of the Egyptian military.

Among politicians, Mohamed Hussein Tantawi ranks 2,752 out of 15,710. Before him are Mozaffar ad-Din Shah Qajar, Julius Schreck, Apepi, Mentuhotep I, Pelopidas, and Eduard Limonov. After him are Erna Solberg, Franz I, Prince of Liechtenstein, Rudolf von Laban, Gnaeus Domitius Corbulo, Cleopatra Selene of Syria, and Marie of Luxembourg, Queen of France.