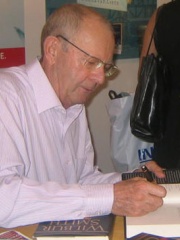 Wilbur Addison Smith (9 January 1933 – 13 November 2021) was a Zambian-born British-South African novelist specialising in historical fiction about international involvement in Southern Africa across four centuries, seen from the viewpoints of both black and white families. An accountant by training, he gained a film contract with his first published novel When the Lion Feeds. This encouraged him to become a full-time writer, and he developed three long chronicles of the South African experience which all became best-sellers. Read more on Wikipedia

Wilbur Smith is most famous for his historical fiction novels set in Africa, particularly the Courtney series.

Among writers, Wilbur Smith ranks 545 out of 5,755. Before him are Eugene O'Neill, Erich Kästner, Marie-Antoine Carême, Ivan Bunin, Laurence Sterne, and Kazuo Ishiguro. After him are Alfred Jarry, Aulus Gellius, Gaius Julius Hyginus, A. A. Milne, Heinrich Mann, and Luo Guanzhong.

Among WRITERS In Zambia