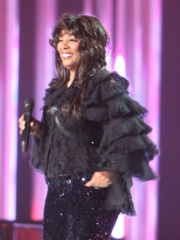 LaDonna Adrian Gaines (December 31, 1948 – May 17, 2012), known professionally as Donna Summer, was an American singer, songwriter and actress. She gained prominence during the disco era of the 1970s and became known as the "Queen of Disco", while her music gained a global following.While influenced by the counterculture of the 1960s, Summer became the lead singer of a psychedelic rock band named Crow and moved to New York City. Joining a touring version of the musical Hair, she left New York and spent several years living, acting and singing in Europe, where she met music producers Giorgio Moroder and Pete Bellotte in Munich, where they recorded influential disco hits such as "Love to Love You Baby" and "I Feel Love", marking her breakthrough into an international career. Read more on Wikipedia

Donna Summer was an American singer and songwriter. She was most famous for her disco songs, which were popular in the 1970s.