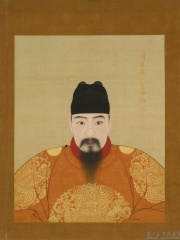 The Hongzhi Emperor (Chinese: 弘治; pinyin: Hóngzhì) (30 July 1470 – 9 June 1505) was the 10th Emperor of the Ming dynasty, reigned from 1487 to 1505. Born Zhu Youcheng, he was the eldest surviving son of the Chenghua Emperor and his reign as emperor of China is called the "Hongzhi Silver Age". His era name, "Hongzhi", means "great government." A peace-loving emperor, the Hongzhi Emperor also had only one empress and no concubines, granting him the distinction of being the sole perpetually monogamous emperor in Chinese history, besides Emperor Fei. Read more on Wikipedia

The Hongzhi Emperor was most famous for his abilities in poetry and calligraphy.

Among politicians, Hongzhi Emperor ranks 1,881 out of 15,710. Before him are Otto Strasser, Abdel Fattah el-Sisi, Afonso II of Portugal, Emperor Huizong of Song, Lucius Quinctius Cincinnatus, and Canute IV of Denmark. After him are Sancho I of Portugal, Prince Marko, Marie Thérèse Louise of Savoy, Princesse de Lamballe, Titus Tatius, Amasis II, and Karl Hanke.

Among people born in 1470, Hongzhi Emperor ranks 7. Before him are Selim I, Edward V of England, Charles VIII of France, Piri Reis, Isabella of Aragon, Queen of Portugal, and Martin Waldseemüller. After him are Catherine of Navarre, György Dózsa, Pietro Bembo, Francis, Count of Vendôme, Isabella of Aragon, Duchess of Milan, and Juan Díaz de Solís. Among people deceased in 1505, Hongzhi Emperor ranks 3. Before him are Ivan III of Russia and Joan of France, Duchess of Berry. After him are Al-Suyuti, Jacob Obrecht, Heinrich Kramer, Elizabeth of Austria, Ercole I d'Este, Duke of Ferrara, Ascanio Sforza, Johannes Widmann, and Jean Hey.