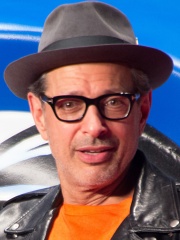 Jeffrey Lynn Goldblum (born October 22, 1952) is an American actor and musician. He has starred in some of the highest-grossing films of his era, such as Jurassic Park (1993) and Independence Day (1996), as well as their respective sequels, The Lost World: Jurassic Park (1997) and Jurassic World: Fallen Kingdom (2018), and Independence Day: Resurgence (2016). Goldblum also starred in films including Invasion of the Body Snatchers (1978), The Big Chill (1983), and Into the Night (1985), before coming to wider attention as Seth Brundle in David Cronenberg's The Fly (1986), which earned him a Saturn Award for Best Actor. Read more on Wikipedia

Jeff Goldblum is most famous for his role as Dr. Ian Malcolm in the Jurassic Park movies.