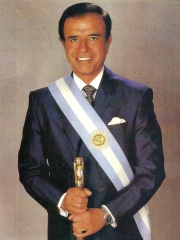 Carlos Saúl Menem (2 July 1930 – 14 February 2021) was an Argentine lawyer and politician who served as the President of Argentina from 1989 to 1999. Ideologically, he identified as a Peronist and supported economically liberal policies. He led Argentina as president during the 1990s and implemented a free market liberalization. Read more on Wikipedia

Carlos Menem is most famous for being the president of Argentina from 1989 to 1999. He is also known for implementing a series of neoliberal economic reforms during his presidency.

Among politicians, Carlos Menem ranks 2,083 out of 15,577. Before him are Menelik I, François Darlan, Euric, Konstantin Päts, Karl Theodor, Duke in Bavaria, and Toghrul. After him are Antonio López de Santa Anna, Ivan I of Moscow, Amasis II, Hamad bin Isa Al Khalifa, Richard of Shrewsbury, Duke of York, and Tiu.