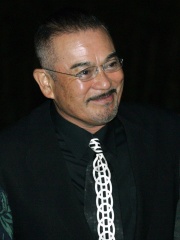 Shinichi Chiba (Japanese: 千葉 真一, Hepburn: Chiba Shin'ichi, 22 January 1939 – 19 August 2021), known internationally as Sonny Chiba, was a Japanese actor and martial artist. Chiba was one of the first actors to achieve stardom through his skills in martial arts, initially in Japan and later before an international audience.Born in Fukuoka, Chiba played a variety of sports in high school, including baseball and volleyball. He also practiced gymnastics and National Sports Festival of Japan in his third year. Read more on Wikipedia

Sonny Chiba is most famous for his karate skills and his starring roles in the "Street Fighter" and "Kill Bill" movies.