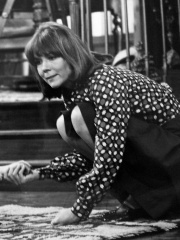 Dame Enid Diana Elizabeth Rigg (20 July 1938 – 10 September 2020) was an English stage and screen actress. Some of her notable roles were as Emma Peel in the TV series The Avengers (1965–1968); Countess Teresa di Vicenzo, wife of James Bond, in On Her Majesty's Secret Service (1969); and Olenna Tyrell in Game of Thrones (2013–2017). Rigg had a successful career and life in theatre, making her professional stage debut in 1957 in The Caucasian Chalk Circle, and joining the Royal Shakespeare Company in 1959, she made her Broadway debut in Abelard & Heloise in 1971. Read more on Wikipedia

Since 2007, the English Wikipedia page of Diana Rigg has received more than 5,122,984 page views. Her biography is available in 39 different languages on Wikipedia making her the 396th most popular actor.