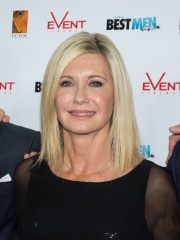 Dame Olivia Newton-John (born 26 September 1948) is a British-Australian singer, songwriter, actress, entrepreneur and activist. She is a four-time Grammy Award winner whose chart career includes five US number ones and another ten Top Tens on Billboard's Hot 100, and two Billboard 200 number-one albums: If You Love Me, Let Me Know (1974) and Have You Never Been Mellow (1975). Eleven of her singles (including two Platinum) and 14 of her albums (including two Platinum and four 2× Platinum) have been certified Gold by the Recording Industry Association of America (RIAA). Read more on Wikipedia

Olivia Newton-John is most famous for her music, especially her songs "Physical," "Let's Get Physical," and "You're the One That I Want."