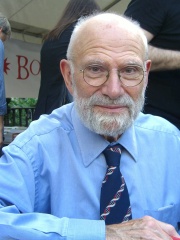 Oliver Wolf Sacks, (9 July 1933 – 30 August 2015) was a British neurologist, naturalist, historian of science, and writer. Born in Britain, Sacks received his medical degree in 1958 from The Queen's College, Oxford, before moving to the United States, where he spent most of his career. He interned at Mount Zion Hospital in San Francisco and completed his residency in neurology and neuropathology at the University of California, Los Angeles (UCLA). Read more on Wikipedia

Oliver sacks is most famous for his book the man who mistook his wife for a hat. The book is about various neurological disorders and how they affect the person's life.

Among writers, Oliver Sacks ranks 657 out of 5,755. Before him are Theodore the Studite, Bert Hellinger, Jean Anthelme Brillat-Savarin, Columella, Frontinus, and William Saroyan. After him are Georges Perec, Dimitrie Cantemir, Maya Angelou, Ismail Gaspirali, Alfred de Vigny, and Sven Hassel.