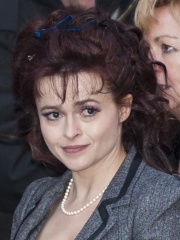 Helena Bonham Carter (born 26 May 1966) is an English actress. Known for her roles in blockbusters and independent films, particularly period dramas, she has received various awards and nominations, including a British Academy Film Award and an International Emmy Award, in addition to nominations for two Academy Awards, four British Academy Television Awards, five Primetime Emmy Awards, and nine Golden Globe Awards. Bonham Carter rose to prominence by playing Lucy Honeychurch in A Room with a View (1985) and the title character in Lady Jane (1986). Read more on Wikipedia

Helena Bonham Carter is most famous for her role as Bellatrix Lestrange in the Harry Potter film series.