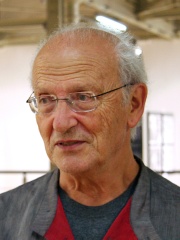 Jean Henri Gaston Giraud (French: [ʒiʁo]; 8 May 1938 – 10 March 2012) was a French artist, cartoonist, and writer who worked in the Franco-Belgian bandes dessinées (BD) tradition. Giraud garnered worldwide acclaim under the pseudonym Moebius (; French: [məbjys]), as well as Gir (French: [ʒiʁ]) outside the English-speaking world, used for the Blueberry series—his most successful creation in the non-English speaking parts of the world—and his Western-themed paintings. Esteemed by Federico Fellini, Stan Lee, and Hayao Miyazaki, among others, he has been described as the most influential bandes dessinées artist after Hergé.His most famous works include the series Blueberry, created with writer Jean-Michel Charlier, featuring one of the first antiheroes in Western comics. Read more on Wikipedia

Jean Giraud was a French artist who is most famous for his work on the French comic series, "The Adventures of Tintin".

Among COMIC ARTISTS In France