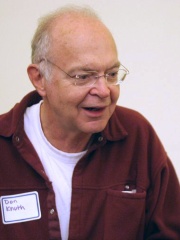 Donald Ervin Knuth ( kə-NOOTH; born January 10, 1938) is an American computer scientist, mathematician, and professor emeritus at Stanford University. He is the 1974 recipient of the ACM Turing Award, informally considered the Nobel Prize of computer science. Knuth has been called the "father of the analysis of algorithms".He is the author of the multi-volume work The Art of Computer Programming and contributed to the development of the rigorous analysis of the computational complexity of algorithms and systematized formal mathematical techniques for it. Read more on Wikipedia

Donald Knuth is most famous for his work in computer science, and in particular, for the development of the TeX typesetting system.