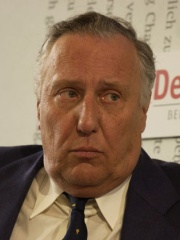 Frederick McCarthy Forsyth (born 25 August 1938) is an English novelist and journalist. He is best known for thrillers such as The Day of the Jackal, The Odessa File, The Fourth Protocol, The Dogs of War, The Devil's Alternative, The Fist of God, Icon, The Veteran, Avenger, The Afghan, The Cobra and The Kill List. Forsyth's works frequently appear on best-sellers lists and more than a dozen of his titles have been adapted to film. Read more on Wikipedia

Forsyth is most famous for his novel The Day of the Jackal, which is about a professional assassin hired to kill French president Charles de Gaulle.