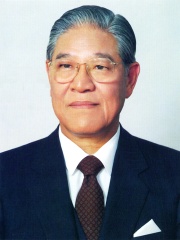 Lee Teng-hui (Chinese: 李登輝; 15 January 1923 – 30 July 2020) was a Taiwanese statesman and agriculturist who served as President of the Republic of China (Taiwan) under the 1947 Constitution and chairman of the Kuomintang (KMT) from 1988 to 2000. He was the first president to be born in Taiwan, the last to be indirectly elected and the first to be directly elected. During his presidency, Lee oversaw the end of martial law and the full democratization of the ROC, advocated the Taiwanese localization movement, and led an ambitious foreign policy to gain allies around the world. Read more on Wikipedia

Among politicians, Lee Teng-hui ranks 2,500 out of 15,577. Before him are Ambrogio Spinola, 1st Marquess of Balbases, Halfdan the Black, Amyntas IV of Macedon, Hacı I Giray, Ma Chao, and Yazid II. After him are Menkauhor Kaiu, Ahmad Shah Durrani, Frederick Christian, Elector of Saxony, Walter Scheel, Yuan Shu, and George, King of Saxony.