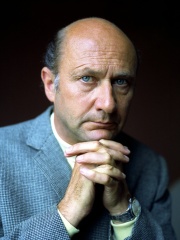 Donald Henry Pleasence (; 5 October 1919 – 2 February 1995) was an English actor. He began his career onstage in his native Britain before transitioning into a screen career, where he played numerous supporting and character roles including RAF Flight Lieutenant Colin Blythe in The Great Escape (1963), the villain Ernst Stavro Blofeld in the James Bond film You Only Live Twice (1967), SEN 5241 in THX 1138 (1971), and the deranged Clarence "Doc" Tydon in Wake in Fright (1971). Pleasence gained widespread recognition for his role as psychiatrist Dr Samuel Loomis in Halloween (1978) and four of its sequels, a role for which he was nominated for a Saturn Award for Best Actor. Read more on Wikipedia

Since 2007, the English Wikipedia page of Donald Pleasence has received more than 2,824,644 page views. His biography is available in 68 different languages on Wikipedia making him the 267th most popular actor.