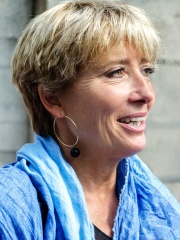 Dame Emma Thompson (born 15 April 1959) is a British actress, screenwriter, activist, author and comedian. She is one of Britain's most acclaimed actresses and is the recipient of numerous accolades, including two Academy Awards, a Primetime Emmy Award, three BAFTA Awards and two Golden Globe Awards. Born in London to English actor Eric Thompson and Scottish actress Phyllida Law, Thompson was educated at Newnham College, University of Cambridge, where she became a member of the Footlights troupe. Read more on Wikipedia

Since 2007, the English Wikipedia page of Emma Thompson has received more than 12,748,183 page views. Her biography is available in 66 different languages on Wikipedia making her the 507th most popular actor.