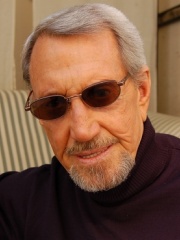 Roy Richard Scheider (; November 10, 1932 – February 10, 2008) was an American actor and amateur boxer. Described by AllMovie as "one of the most unique and distinguished of all Hollywood actors", he gained fame for his leading and supporting roles in celebrated films from the 1970s through to the early to mid-1980s. He was nominated for two Academy Awards, a Golden Globe Award, and a BAFTA Award.His best-known roles include Chief Martin Brody in Jaws (1975) and its sequel Jaws 2 (1978), NYPD Detective "Cloudy" Russo in The French Connection (1971); NYPD Detective "Buddy" in The Seven-Ups (1973); Doc Levy in Marathon Man (1976); choreographer and film director Joe Gideon in All That Jazz (1979); Officer Frank Murphy in Blue Thunder (1983); and Dr. Heywood R. Read more on Wikipedia

Roy Scheider is most famous for playing Chief Brody in the 1975 blockbuster film Jaws.