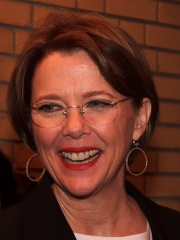 Annette Carol Bening (born May 29, 1958) is an American actress. She began her career on stage with the Colorado Shakespeare Festival company in 1980, and played Lady Macbeth in 1984 at the American Conservatory Theater. She was nominated for the 1987 Tony Award for Best Featured Actress in a Play for her Broadway debut in Coastal Disturbances and for the 2019 Tony Award for Best Actress in a Play for All My Sons. Read more on Wikipedia

Since 2007, the English Wikipedia page of Annette Bening has received more than 6,760,899 page views. Her biography is available in 54 different languages on Wikipedia making her the 882nd most popular actor.