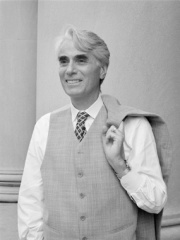 Robert Nozick (; November 16, 1938 – January 23, 2002) was an American philosopher. He held the Joseph Pellegrino University Professorship at Harvard University, and was president of the American Philosophical Association. He is best known for his books Anarchy, State, and Utopia (1974), a libertarian answer to John Rawls' A Theory of Justice (1971), in which Nozick also presented his own theory of utopia as one in which people can freely choose the rules of the society they enter into, and Philosophical Explanations (1981), which included his counterfactual theory of knowledge. Read more on Wikipedia

Robert Nozick is most famous for his book Anarchy, State, and Utopia. In this book, he argues that the only legitimate purpose of a state is to protect individual rights.

Among philosophers, Robert Nozick ranks 293 out of 1,081. Before him are Nicolai Hartmann, Félix Guattari, Roscellinus, Ramana Maharshi, Adam of Bremen, and Synesius. After him are Sri Aurobindo, Hipparchia of Maroneia, Jerome of Prague, Rudolf Otto, Fakhr al-Din al-Razi, and Aristoxenus.