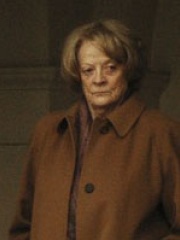 Dame Margaret Natalie Smith, (born 28 December 1934) is an English actress. With an extensive career on screen and stage beginning in the mid-1950s, Smith has appeared in over 60 films and 70 plays. The recipient of several accolades, including two Academy Awards, a Tony Award and four Primetime Emmy Awards (making her one of few artists to achieve the "Triple Crown of Acting") in addition to seven BAFTA Awards, three Golden Globe Awards and five Screen Actors Guild Awards, she is one of Britain's most recognisable and prolific actresses, and was made a Dame by Queen Elizabeth II in 1990 for contributions to the Arts, and a Companion of Honour in 2014 for services to Drama.Smith began her career on stage as a student, performing at the Oxford Playhouse in 1952, and made her professional debut on Broadway in New Faces of '56. Read more on Wikipedia

Maggie Smith is most famous for her role as Professor Minerva McGonagall in the Harry Potter series.