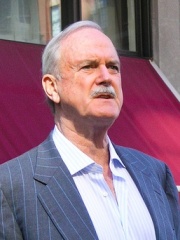 John Marwood Cleese ( KLEEZ; born 27 October 1939) is an English actor, comedian, screenwriter, and producer. Emerging from the Cambridge Footlights in the 1960s, he first achieved success at the Edinburgh Festival Fringe and as a scriptwriter and performer on The Frost Report. In the late 1960s, he co-founded Monty Python, the comedy troupe responsible for the sketch show Monty Python's Flying Circus. Read more on Wikipedia

Since 2007, the English Wikipedia page of John Cleese has received more than 10,609,212 page views. His biography is available in 65 different languages on Wikipedia (up from 62 in 2019). John Cleese is the 331st most popular actor (down from 316th in 2019), the 479th most popular biography from United Kingdom and the 52nd most popular British Actor.

John Cleese is most famous for his role as Basil Fawlty in Fawlty Towers.