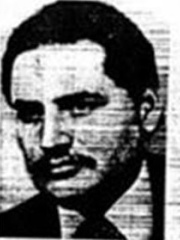 Ilich Ramírez Sánchez (Spanish: [ilitʃ raˈmiɾes ˈsantʃes]; born 12 October 1949), also known as Carlos the Jackal (Spanish: Carlos el Chacal), is a native Venezuelan convicted of terrorist crimes, and currently serving a life sentence in France for the 1975 murder of an informant for the French government and two French counter-intelligence agents. While in prison he was further convicted of attacks in France that killed 11 and injured 150 people and sentenced to an additional life term in 2011, and then to a third life term in 2017.A committed Marxist–Leninist, Ramírez Sánchez was one of the most notorious political terrorists of his era. When he joined the Popular Front for the Liberation of Palestine (PFLP) in 1970, recruiting officer Bassam Abu Sharif gave him the code name "Carlos" because of his South American roots. Read more on Wikipedia

Since 2007, the English Wikipedia page of Carlos the Jackal has received more than 2,062,283 page views. His biography is available in 41 different languages on Wikipedia making him the 20th most popular extremist.

Page views of Carlos the Jackals by language

Among extremists, Carlos the Jackal ranks 20 out of 182. Before him are Ed Gein, Man in the Iron Mask, Abdullah Öcalan, Abu Bakr al-Baghdadi, Albert Fish, and Ted Kaczynski. After him are Zodiac Killer, Cleon, Jim Jones, John Wayne Gacy, Amon Göth, and Charles Ponzi.

Among EXTREMISTS In Venezuela

Among extremists born in Venezuela, Carlos the Jackal ranks 1.