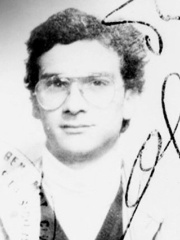 Matteo Messina Denaro (Italian pronunciation: [matˈtɛːo mesˈsiːna deˈnaːro]; born 26 April 1962), also known as Diabolik, is a Sicilian Mafia boss. He got his nickname from the Italian comic book character of the same name. He is considered to be one of the new leaders of Cosa Nostra after the arrest of Bernardo Provenzano on 11 April 2006, and the arrest of Salvatore Lo Piccolo in November 2007. Read more on Wikipedia

Since 2007, the English Wikipedia page of Matteo Messina Denaro has received more than 1,106,246 page views. His biography is available in 15 different languages on Wikipedia making him the 144th most popular extremist.