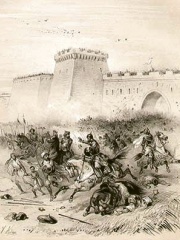 Louis II (825 – 12 August 875), sometimes called the Younger, was the king of Italy and emperor of the Carolingian Empire from 844, co-ruling with his father Lothair I until 855, after which he ruled alone. Louis's usual title was imperator augustus ("august emperor"), but he used imperator Romanorum ("emperor of the Romans") after his conquest of Bari in 871, which led to poor relations with the Eastern Roman Empire. Read more on Wikipedia

Louis II of Italy is most famous for being the last ruler of the Kingdom of Italy. He was the son of Amadeus III of Savoy and Maria of Burgundy. Louis II was only three years old when his father died, so his uncle Charles I of Savoy acted as regent.

Page views of Louis II of Italies by language

Among politicians, Louis II of Italy ranks 1,435 out of 15,577. Before him are Louise Mountbatten, Engelbert Dollfuss, La Malinche, Pelagius of Asturias, Ernst Thälmann, and Soong Ching-ling. After him are Anastas Mikoyan, Yitzhak Shamir, Dongmyeong of Goguryeo, Getúlio Vargas, Pauline Bonaparte, and Maria Amalia of Naples and Sicily.