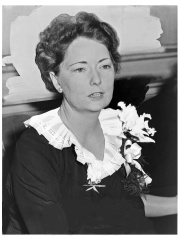 Margaret Munnerlyn Mitchell (November 8, 1900 – August 16, 1949) was an American novelist and journalist. Mitchell wrote only one novel, published during her lifetime, the American Civil War-era novel Gone with the Wind, for which she won the National Book Award for Fiction for Most Distinguished Novel of 1936 and the Pulitzer Prize for Fiction in 1937. Long after her death, a collection of Mitchell's girlhood writings and a novella she wrote as a teenager, titled Lost Laysen, were published. Read more on Wikipedia

Margaret Mitchell is most famous for writing Gone with the Wind, which is a novel about the Southern United States during the Civil War and Reconstruction.

Among writers, Margaret Mitchell ranks 296 out of 5,755. Before her are Ernst Jünger, Simonides of Ceos, Alice Munro, Claude Simon, Marguerite Duras, and Filippo Tommaso Marinetti. After her are Mikhail Sholokhov, Lucan, Saadi Shirazi, Fuzûlî, Heinrich von Kleist, and Alberto Moravia.