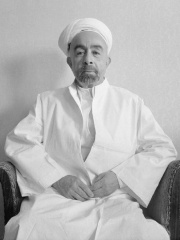 Abdullah I of Jordan

Abdullah I bin Al-Hussein (Arabic: عبد الله الأول بن الحسين‎, Abd Allāh Al-Awal ibn Al-Husayn, 2 February 1882 – 20 July 1951) was the founder and ruler of the Jordanian realm from 11 April 1921 until his assassination on the 20th of July 1951. He was the Emir of Transjordan, a British protectorate, until 25 May 1946, after which he was the king of an independent Jordan. As a member of the Hashemite dynasty, the royal family of Jordan since 1921, Abdullah was a 38th-generation direct descendant of Muhammad.Born in Mecca, Hejaz, Ottoman Empire, Abdullah was the second of four sons of Hussein bin Ali, Sharif of Mecca, and his first wife, Abdiyya bint Abdullah. Read more on Wikipedia

Abdullah I of Jordan is most famous for being the ruler of Jordan from 1921-1951. He was also the first king of Jordan and the founder of the Hashemite dynasty.

Page views of Abdullah I of Jordans by language

Among politicians, Abdullah I of Jordan ranks 1,032 out of 15,710. Before him are Demetrius I of Macedon, Emperor Wu of Jin, Richard Cromwell, Zachary Taylor, Jalal Talabani, and Probus. After him are 5th Dalai Lama, Jean Monnet, Frederick V of Denmark, Grover Cleveland, Nestor, and Stanisław August Poniatowski.