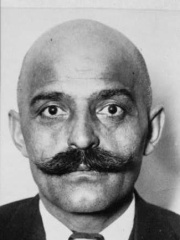 George Ivanovich Gurdjieff (, Russian: Гео́ргий Ива́нович Гурджи́ев, Greek: Γεώργιος Γεωργιάδης, Armenian: Գեորգի Գյուրջիև; 31 March 1866/14 January 1872/28 November 1877 – 29 October 1949) was a mystic, philosopher, spiritual teacher, and composer of Armenian and Greek descent, born in Alexandrapol (now Gyumri), Armenia. Gurdjieff taught that most humans do not possess a unified consciousness and thus live their lives in a state of hypnotic "waking sleep", but that it is possible to awaken to a higher state of consciousness and achieve full human potential. Read more on Wikipedia

Since 2007, the English Wikipedia page of George Gurdjieff has received more than 1,297,487 page views. His biography is available in 42 different languages on Wikipedia making him the 119th most popular philosopher.

Among philosophers, George Gurdjieff ranks 117 out of 1,005. Before him are Antisthenes, Charles Fourier, Bodhidharma, Herbert Marcuse, Hans-Georg Gadamer, and Aristippus. After him are Emil Cioran, Oswald Spengler, Ramon Llull, Duns Scotus, Rudolf Christoph Eucken, and Eusebius.

Among PHILOSOPHERS In Armenia

Among philosophers born in Armenia, George Gurdjieff ranks 1. After him are Anania Shirakatsi (610).