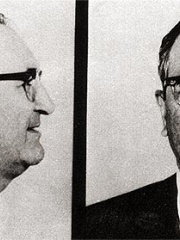 Joseph Charles Bonanno (born Giuseppe Carlo Bonanno; Italian: [dʒuˈzɛppe ˈkarlo boˈnanno]; January 18, 1905 – May 11, 2002), sometimes referred to as Joe Bananas, was an Italian-American crime boss of the Bonanno crime family, which he ran from 1931 to 1968. Bonanno was born in Castellammare del Golfo, Sicily, where his father was also involved in organized crime. At the age of three, Bonanno immigrated to New York City with his family, for about 10 years before he moved back to Italy. Read more on Wikipedia

Since 2007, the English Wikipedia page of Joseph Bonanno has received more than 1,329,462 page views. His biography is available in 15 different languages on Wikipedia making him the 97th most popular extremist.