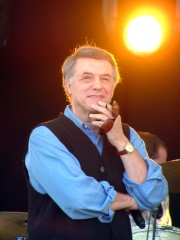 Salvatore Adamo (born November 1, 1943) is a Belgian-Italian musician, singer and composer, who is known for his romantic ballads. Adamo was born in Comiso, Sicily, Italy, and has lived in Belgium since the age of three, which is why he has dual citizenship. Since 2001 Adamo holds the Belgian noble title of Ridder, similar to the English title of "Knight".He first gained popularity throughout Europe and later in the Middle East, Latin America, Japan, and the United States. Read more on Wikipedia

Salvatore Adamo is a famous singer and songwriter. He is most famous for his song "Nel Blu Dipinto Di Blu" which was translated into English as "Volare" and was a major hit in the United States.

Among singers, Salvatore Adamo ranks 64 out of 3,528. Before him are Sarah Vaughan, Stevie Wonder, Eminem, Carlos Gardel, Amália Rodrigues, and Rod Stewart. After him are Víctor Jara, The Notorious B.I.G., Ian Gillan, Klaus Meine, Diana Ross, and Johnny Hallyday.