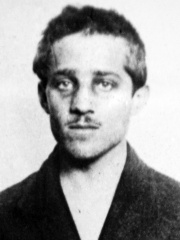 Gavrilo Princip (Serbian Cyrillic: Гаврило Принцип, pronounced [ɡǎʋrilo prǐntsiːp]; 25 July 1894 – 28 April 1918) was a Bosnian Serb member of Young Bosnia who sought an end to Austro-Hungarian rule in Bosnia and Herzegovina. At the age of 19, he assassinated Archduke Franz Ferdinand of Austria and the Archduke's wife, Sophie, Duchess of Hohenberg, in Sarajevo on 28 June 1914. Princip and his accomplices were arrested and implicated as members of a nationalist secret society, aiming to remove Habsburg colonial rule, which initiated the July Crisis and led to the outbreak of World War I. At his trial, Princip stated that: "I am a Yugoslav nationalist, aiming for the unification of all Yugoslavs, and I do not care what form of state, but it must be free from Austria." Princip was sentenced to twenty years in prison, the maximum for his age, and was imprisoned at the Terezín fortress. Read more on Wikipedia

Gavrilo Princip is most famous for assassinating Archduke Franz Ferdinand of Austria and his wife, Sophie, Duchess of Hohenberg, in Sarajevo on June 28, 1914. This assassination led to the start of World War I.

Among extremists, Gavrilo Princip ranks 5 out of 205. Before him are Jack the Ripper, Charles Manson, John Wilkes Booth, and Elizabeth Báthory. After him are Osama bin Laden, Ted Bundy, Herostratus, Lee Harvey Oswald, Gilles de Rais, Man in the Iron Mask, and Andrei Chikatilo.

Among EXTREMISTS In Bosnia and Herzegovina

Among extremists born in Bosnia and Herzegovina, Gavrilo Princip ranks 1. After him are Nedeljko Čabrinović (1895).