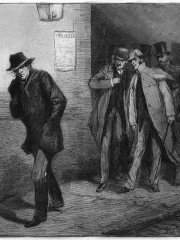 Jack the Ripper was an unidentified serial killer active in the largely impoverished areas in and around the Whitechapel district of London in 1888. In both the criminal case files and contemporary journalistic accounts, the killer was called the Whitechapel Murderer and Leather Apron. Attacks ascribed to Jack the Ripper typically involved female prostitutes who lived and worked in the slums of the East End of London. Read more on Wikipedia

Since 2007, the English Wikipedia page of Jack the Ripper has received more than 15,352,210 page views. His biography is available in 71 different languages on Wikipedia (up from 69 in 2019). Jack the Ripper is the most popular extremist.

Jack the Ripper is most famous for being a serial killer who murdered prostitutes in London's East End.

Page views of Jack the Rippers by language