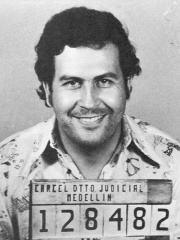 Pablo Emilio Escobar Gaviria (; Spanish: [ˈpaβlo es.koˈβ̞aɾ]; 1 December 1949 – 2 December 1993) was a Colombian drug lord and narcoterrorist who was the founder and sole leader of the Medellín Cartel. Dubbed "the king of cocaine", Escobar is the wealthiest criminal in history, having amassed an estimated net worth of US$30 billion by the time of his death—equivalent to $64 billion as of 2021—while his drug cartel monopolized the cocaine trade into the United States in the 1980s and early 1990s.Born in Rionegro and raised in Medellín, Escobar studied briefly at Universidad Autónoma Latinoamericana of Medellín, but left without graduating; he instead began engaging in criminal activity, selling illegal cigarettes and fake lottery tickets, as well as participating in motor vehicle theft. Read more on Wikipedia

Pablo Escobar was a Colombian drug lord who was responsible for the death of thousands of people.

Among mafiosos born in Colombia, Pablo Escobar ranks 1. After him are Griselda Blanco (1943).