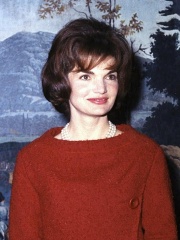 Jacqueline Lee Kennedy Onassis (née Bouvier ; July 28, 1929 – May 19, 1994) was an American socialite, writer, photographer, and book editor who served as First Lady of the United States from 1961 to 1963, as the wife of President John F. Kennedy. A popular first lady, she endeared the American public with her devotion to her family, dedication to the historic preservation of the White House, the campaigns she led to preserve and restore historic landmarks and architecture along with her interest in American history, culture and arts. During her lifetime, she was regarded as an international icon for her unique fashion choices.After graduating with a Bachelor of Arts in French literature from George Washington University in 1951, Bouvier started working for the Washington Times-Herald as an inquiring photographer. Read more on Wikipedia

Jacqueline Kennedy Onassis was the wife of President John F. Kennedy and the first lady of the United States from 1961 to 1963. She was often referred to as "Jackie O."

Among companions, Jacqueline Kennedy Onassis ranks 17 out of 673. Before her are Helena, Khadija bint Khuwaylid, Empress Joséphine, Marie Louise, Duchess of Parma, Madame de Pompadour, and Nefertari. After her are Lucretia, Jane Seymour, Ankhesenamun, Roxana, Bathsheba, and Elizabeth of York.