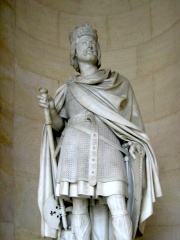 Charles Martel (676-90 – 22 October 741) was a Frankish statesman and military leader who, as Duke and Prince of the Franks and Mayor of the Palace, was the de facto ruler of Francia from 718 until his death. He was a son of the Frankish statesman Pepin of Herstal and Pepin's mistress, a noblewoman named Alpaida. Charles, also known as “The Hammer” (in old French, Martel), successfully asserted his claims to power as successor to his father as the power behind the throne in Frankish politics. Read more on Wikipedia

Charles Martel is most famous for his victory over the Muslims at the Battle of Tours in 732.

Among military personnels, Charles Martel ranks 9 out of 1,466. Before him are Joan of Arc, Timur, Spartacus, Charles de Gaulle, Erwin Rommel, and Karl Dönitz. After him are Adolf Eichmann, William Wallace, Chiang Kai-shek, Themistocles, Khalid ibn al-Walid, and Cao Cao.

Among MILITARY PERSONNELS In Belgium