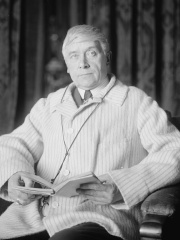 Maurice Polydore Marie Bernard Maeterlinck (29 August 1862 – 6 May 1949), also known as Count (or Comte) Maeterlinck from 1932, was a Belgian playwright, poet, and essayist who was Flemish but wrote in French. He was awarded the Nobel Prize in Literature in 1911 "in appreciation of his many-sided literary activities, and especially of his dramatic works, which are distinguished by a wealth of imagination and by a poetic fancy, which reveals, sometimes in the guise of a fairy tale, a deep inspiration, while in a mysterious way they appeal to the readers' own feelings and stimulate their imaginations". The main themes in his work are death and the meaning of life. Read more on Wikipedia

Maurice Maeterlinck is most famous for his play "The Blue Bird" which was written in 1908. The play is about two children, Tyltyl and Mytyl, who go on a quest to find the blue bird of happiness.

Among WRITERS In Belgium