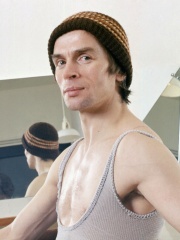 Rudolf Khametovich Nureyev ( NURE-ee-ef, nyuurr-AY-ef; Tatar/Bashkir: Рудольф Хәмит улы Нуриев; Russian: Рудо́льф Хаме́тович Нуре́ев, IPA: [rʊˈdolʲf xɐˈmʲetəvʲɪtɕ nʊˈrʲejɪf]; 17 March 1938 – 6 January 1993) was a Soviet-born ballet dancer and choreographer. Nureyev is regarded by some as the greatest male ballet dancer of his generation.Nureyev was born on a Trans-Siberian train near Irkutsk, Siberia, Soviet Union, to a Tatar family. He began his early career with the company that in the Soviet era was called the Kirov Ballet (now called by its original name, the Mariinsky Ballet) in Leningrad. Read more on Wikipedia

Rudolf Nureyev was a Russian ballet dancer who defected to the west in 1961. He was most famous for his performances with the Paris Opera Ballet and the Royal Ballet.

Among people born in 1938, Rudolf Nureyev ranks 8. Before him are Romy Schneider, Juan Carlos I of Spain, Beatrix of the Netherlands, Claudia Cardinale, Adriano Celentano, and Jon Voight. After him are Queen Sofía of Spain, Leonid Kuchma, Nico, Islam Karimov, Farah Pahlavi, and Joe Dassin. Among people deceased in 1993, Rudolf Nureyev ranks 4. Before him are Pablo Escobar, Audrey Hepburn, and Federico Fellini. After him are Erich Hartmann, Frank Zappa, James Hunt, Baudouin of Belgium, William Golding, Ferruccio Lamborghini, Turgut Özal, and Zviad Gamsakhurdia.

Among DANCERS In Russia