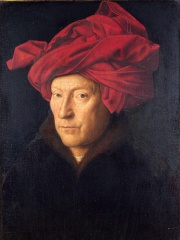 Jan van Eyck ( van EYEK, Dutch: [ˈjɑn vɑn ˈɛik]; c.  before 1390 – 9 July 1441) was a painter active in Bruges who was one of the early innovators of what became known as Early Netherlandish painting, and one of the most significant representatives of Early Northern Renaissance art. The surviving records indicate that he was born around 1380–1390, most likely in Maaseik (then Maaseyck, hence his name), in present-day Belgium. He took employment in the Hague around 1422 when he was already a master painter with workshop assistants, and was employed as painter and valet de chambre with John III the Pitiless, ruler of Holland and Hainaut. Read more on Wikipedia

Since 2007, the English Wikipedia page of Jan van Eyck has received more than 1,498,198 page views. His biography is available in 74 different languages on Wikipedia. Jan van Eyck is the 25th most popular painter (up from 32nd in 2019), the 2nd most popular biography from Belgium (up from 5th in 2019) and the most popular Belgian Painter.

Jan van Eyck is most famous for being the first painter to use oil paints.

Among painters, Jan van Eyck ranks 25 out of 1,428. Before him are Henri Matisse, Gustav Klimt, Pieter Bruegel the Elder, Donatello, Titian, and El Greco. After him are Pierre-Auguste Renoir, Édouard Manet, Eugène Delacroix, Hieronymus Bosch, Wassily Kandinsky, and Piet Mondrian.

Among PAINTERS In Belgium