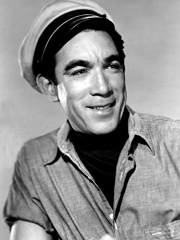 Manuel Antonio Rodolfo Quinn Oaxaca (April 21, 1915 – June 3, 2001), known professionally as Anthony Quinn, was a Mexican-American actor, painter, writer and film director who achieved international renown. He was known for his portrayal of earthy, passionate characters "marked by a brutal and elemental virility" in numerous critically acclaimed movies both in Hollywood and abroad; including La Strada, The Guns of Navarone, Guns for San Sebastian, Lawrence of Arabia, The Shoes of the Fisherman, The Message, Lion of the Desert, and A Walk in the Clouds. Read more on Wikipedia

Since 2007, the English Wikipedia page of Anthony Quinn has received more than 3,905,885 page views. His biography is available in 74 different languages on Wikipedia making him the 54th most popular actor.

Among actors, Anthony Quinn ranks 53 out of 8,832. Before him are Grace Kelly, Harrison Ford, Steven Seagal, Rutger Hauer, Katharine Hepburn, and Marcello Mastroianni. After him are Omar Sharif, Roger Moore, Nicolas Cage, Will Smith, Charles Bronson, and Bruno Ganz.

Among ACTORS In Mexico