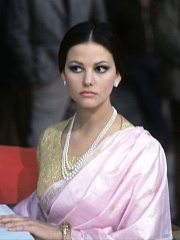 Claude Joséphine Rose "Claudia" Cardinale (French: [klod ʒozefin ʁoz kaʁdinal]; born 15 April 1938) is an Italian actress. She has starred in European films in the 1960s and 1970s, acting in Italian, French, and English. Born and raised in La Goulette, a neighbourhood of Tunis, Cardinale won the "Most Beautiful Italian Girl in Tunisia" competition in 1957, the prize being a trip to Italy, which quickly led to film contracts, due above all to the involvement of Franco Cristaldi, who acted as her mentor for a number of years and later married her. Read more on Wikipedia

Claudia Cardinale is most famous for her role in the 1966 film, The Professionals.

Among people born in 1938, Claudia Cardinale ranks 5. Before her are Kofi Annan, Romy Schneider, Juan Carlos I of Spain, and Beatrix of the Netherlands. After her are Adriano Celentano, Jon Voight, Rudolf Nureyev, Queen Sofía of Spain, Leonid Kuchma, Nico, and Islam Karimov.

Among ACTORS In Tunisia