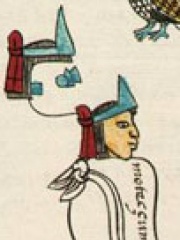 Moctezuma Xocoyotzin (c. 1466 – 29 June 1520) [moteːkʷˈsoːma ʃoːkoˈjoːtsin] modern Nahuatl pronunciation ), variant spellings include Motecuhzomatzin, Montezuma, Moteuczoma, Motecuhzoma, Motēuczōmah, Muteczuma, and referred to retroactively in European sources as Moctezuma II, was the ninth Tlatoani of Tenochtitlan and the sixth Huey Tlatoani or Emperor of the Aztec Empire, reigning from 1502 or 1503 to 1520. The first contact between the indigenous civilizations of Mesoamerica and Europeans took place during his reign, and he was killed during the initial stages of the Spanish conquest of the Aztec Empire, when conquistador Hernán Cortés and his men fought to take over the Aztec capital Tenochtitlan. During his reign, the Aztec Empire reached its greatest size. Read more on Wikipedia

Moctezuma II is most famous for being the Aztec emperor who was overthrown by Hernán Cortés and the Spanish conquistadors.

Among politicians, Moctezuma II ranks 403 out of 15,710. Before him are Galerius, Leopold I of Belgium, Miklós Horthy, Orhan, William III of England, and Radovan Karadžić. After him are Mithridates VI of Pontus, Rüstem Pasha, Charles I of England, Carl Gustaf Emil Mannerheim, Charles IV of France, and Mahmud I.

Among people born in 1466, Moctezuma II ranks 2. Before him is Erasmus. After him are Elizabeth of York, Andrea Doria, Quentin Matsys, Alonso de Ojeda, Francesco II Gonzaga, Marquess of Mantua, Giovanni Sforza, Ottaviano Petrucci, and Ashikaga Yoshitane. Among people deceased in 1520, Moctezuma II ranks 4. Before him are Raphael, Selim I, and Pedro Álvares Cabral. After him are Martin Waldseemüller, Pier Gerlofs Donia, Cuitláhuac, Kunigunde of Austria, Sten Sture the Younger, Agostino Chigi, Ippolito d'Este, and William Dunbar.