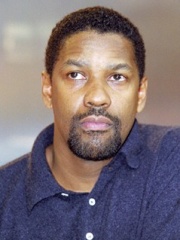 Denzel Hayes Washington Jr. (born December 28, 1954) is an American actor, director, and producer. He has been described as an actor who reconfigured "the concept of classic movie stardom", associating with characters defined by their grace, dignity, humanity, and inner strength. Read more on Wikipedia

Denzel Washington is an American actor and director. He is best known for his roles in the films "The Great Debaters", "Malcolm X", "The Hurricane", "Training Day", "Glory", "Philadelphia", "Remember the Titans", "He Got Game", "American Gangster", "The Book of Eli", "Safe House", "Unstoppable" and "Flight".

Independent
Denzel Washington moved to the verge of tears after hearing praise from his son: ‘I’m speechless’
Oscar-winning actor is the father of Tenet star John David Washington
Louis Chilton
Daily Mail
Denzel Washington nearly tears up after hearing praise from son John David: 'I'm speechless'
It was a rare show of public emotion for the 66-year-old Oscar winner, who doesn't usually discuss his family
Cassie Carpenter
BroBible
Denzel Washington Gets Touchingly Choked Up After Hearing Praise From His Son
Man, did you know that Denzel Washington is 66-years-old these days? Feels like just yesterday I was growing up under the tutelage of Coach Herman Boone. For my money’s worth, Denzel Washington is one of three actors who can make a legitimate claim at being t…
Eric Ital
Theplaylist.net
‘The Equalizer’ Trailer: Queen Latifah Takes Over For Denzel Washington As A Secret Badass Helping Innocent People
Depending on your age, you probably have different ideas about what “The Equalizer” is. If you’re, uh, a person of a certain age, you may remember the ‘80s TV drama about a retired agent that takes it upon himself to use his skills to help innocent people in …
Charles Barfield