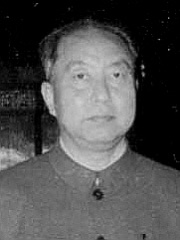 Hua Guofeng (; born Su Zhu; 16 February 1921 – 20 August 2008) was a Chinese politician who served as Chairman of the Communist Party of China and Premier of the People's Republic of China. Hua held the top offices of the government, party, and the military after the deaths of Premier Zhou and Chairman Mao, but was forced out of major political power by more influential party leaders by June 1981 and subsequently retreated from the political scene. Originally from Shanxi province, Hua rose to power as a regional official in Hunan between 1949 and 1971, first serving as the prefecture Party Committee Secretary of the Xiangtan, Mao's home area, then as the party secretary in the province during the latter stages of the Cultural Revolution. Read more on Wikipedia

Among politicians, Hua Guofeng ranks 1,049 out of 15,710. Before him are Maurice, Mayer Amschel Rothschild, Letizia Ramolino, Rafic Hariri, Calvin Coolidge, and Leo V the Armenian. After him are Alexander Kolchak, Decebalus, Onan, Vasili III of Russia, Abū Lahab, and Amadeo I of Spain.