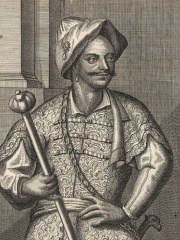 Moulay Ismail Ibn Sharif (Arabic: مولاي إسماعيل بن الشريف), born around 1645 in Sijilmassa and died on 22 March 1727 at Meknes, was a Sultan of Morocco from 1672–1727, as the second ruler of the Alaouite dynasty. He was the seventh son of Moulay Sharif and was governor of the province of Fez and the north of Morocco from 1667 until the death of his half-brother, Sultan Moulay Rashid in 1672. He was proclaimed sultan at Fez, but spent several years in conflict with his nephew Moulay Ahmed ben Mehrez, who also claimed the throne, until the latter's death in 1687. Read more on Wikipedia

Ismail ibn Sharif is most famous for being the Sultan of Morocco from 1672 to 1727.

Among politicians, Ismail Ibn Sharif ranks 1,478 out of 15,710. Before him are Abel, King of Denmark, Archduchess Sophie of Austria, Emperor Xian of Han, Friedrich Fromm, John Sigismund Zápolya, and Amon of Judah. After him are Jiajing Emperor, Robert Ley, Mongkut, Orestes, Gyeongjong of Joseon, and Ferenc Szálasi.